In June 2009, Rebecca and Kathryn upped the ante, announcing their first three-day event, and hitting the road with Engage’s international debut. Held in conjunction with the Cayman Islands Department of Tourism, the event sold out quickly, drawing 125 attendees from 28 states and 9 countries to the luxurious The Ritz-Carlton, Grand Cayman. The event included the largest number of speakers to date, with 22 industry lights including the editor in chiefs from the nation’s four leading bridal magazines, Brides, Martha Stewart Weddings, The Knot and Modern Bride — a feat that became the talk of the industry! The speaker lineup marked the debut of more Engage! favorites, including Style Me Pretty founder Abby Larson, Say Yes to the Dress star Randy Fenoli, destination planner Michelle Rago and Lara Casey of Southern Weddings.

The event kicked off with a welcome party on Seven Mile Beach, planned by Michelle Rago Destinations in conjunction with Celebrations, Ltd. in the signature blue color scheme and capped with a surprise fireworks show that literally started the event with a bang! The next night, the first official Dine Arounds gave attendees the chance to chat with speakers in individual small-group dinners held offsite at Grand Cayman’s top restaurants. At the first-ever Farewell Gala, Cayman-based planner Jo-Anne Brown wowed the attendees with the blue “Under the Sea” theme featuring an oversized floral starfish, and DJ Craig packed not one but two dance floors. In an unplanned moment, Randy Fenoli and Sylvia Weinstock took over the dance floor, an event that was to be repeated at future Engage! summits. 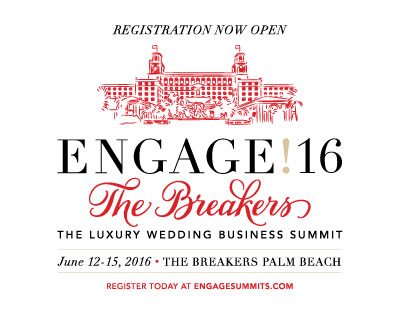