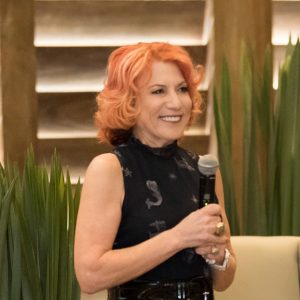 Marcy Blum is an expert in entertaining, etiquette, food and wine. She has been producing creative, magical, and personal events for over 34 years, launching Marcy Blum Associates in 1986.. Due to her humorous and sane approach to entertaining on any scale, Marcy represents HomeGoods as a tastemaker and is a frequent speaker on party planning.

Marcy is considered an innovator in the special events industry and has been celebrated in The New York Times, People Magazine, Vogue and Harpers Bazaar Weddings as well as many other publications.

A graduate of both the original Performing Arts High School and the prestigious Culinary Institute of America, Marcy takes special pride in producing weddings and parties where the entertainment and décor are elegantly theatrical, the food is delicious and creative, the wines are thoughtfully chosen and the service is beyond spectacular.  Most importantly, the events created by Marcy and her team are FUN.

Marcy Blum Associates has produced the weddings of Kyra Sedgwick and Kevin Bacon, Padma Lakshmi and Salman Rushdie, Colin Hanks and Samantha Bryant, Savannah and LeBron James,  Billy Joel and Katie Lee and Nate Berkus and Jeremiah Brent. Marcy’s wizardry in fantastic events has lead her to create Donny Deutsch’s 50th birthday celebration, the original marketing events for Comedy Central, a five story party for the opening of Societe Generale in New York City and many, many, other delightful events internationally.