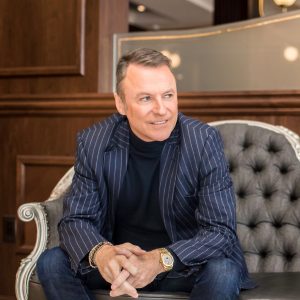 Colin Cowie has led an extraordinary life. He arrived in the U.S. from South Africa in 1985 and it was his smarts, personality and stylish sensibility that led him into the fast tracked, glamorous world of planning over-the-top parties for the who’s who of royalty, celebrity and business. Respected around the world as an arbiter of style, Colin Cowie has been at the forefront of event and wedding planning for the past 25 years, creating trends and raising the bar for the ultimate guest experience.

Colin Cowie is an author of 10 best-selling books and is currently writing his 11th title. Cowie is a seasoned television personality who spent 7 years on the HSN Network, 8 years on NBC Today Show and the CBS Early Show.

Beyond entertaining, Cowie’s work extends into the hospitality where he was creative director for the Mira Hotel in Hong Kong. Colin also served as creative director for NetJets focusing on creating the greatest customer service experience in private aviation. His other hospitality projects currently in development are Park Tower NYC, The Grove Miami and Zaha Hadid Hong Kong.

Colin sits on the board of several philanthropic organizations focusing on arts, education, and mentorship programs in South Africa. His charities include: Lalela, Ubuntu, and Infinite Family.