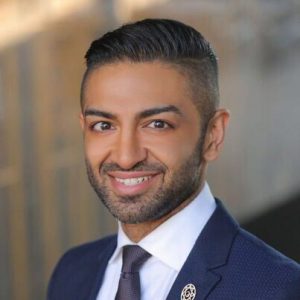 Zameer’s love affair with jewelry began in his teens, working at his family’s jewelry store. He loved being involved in the business because he felt it to be so special to be a part of people’s lives when they were celebrating big moments like engagements.

Impassioned by this experience, after university, Zameer spent several years at McKinsey & Company to gain a broader understanding of business. It was there Zameer realized that he deeply missed fine jewelry.

Unsure of his next step, he headed to Harvard Business School to pursue his MBA. During his first semester, a professor (Rob Kaplan, Ex-Vice Chairman of Goldman Sachs), challenged Zameer to follow his passion. This is when he realized he missed being involved in people’s lives, during times that mattered most.

After Harvard, Zameer reentered the world of fine jewelry by joining De Beers Louis Vuitton as head of the Bridal and Classics division. While he loved learning about diamonds and craftsmanship, he deeply missed working with clients, and found himself wishing he were also responsible for design. From that moment, his passion fully took hold.

Zameer moved to New York and began to reconnect with classmates. They started asking him to design rings for them. He wondered if there was a way to design a ring to not only be classic, but also meaningful. When a man is in love, he has stories – not always complex and elaborate – but the simple moments and memories between two people that make up their unique story.

He took these stories and started to build a classic ring, yet secretly woven into the design were little details of the couple’s story. When the bride retold the story of the ring, her focus wasn’t the diamond or the setting, but about how her husband spent time with Zameer and the special moments that were included.

From there, one ring became ten, which became 100. Now, Zameer has been honored to create over 900 meaningful pieces of fine jewelry for clients all over the world, each one telling its unique story. In the last year alone, he was featured in CNBC, Forbes, Entrepreneur, VOGUE, New York Post, CNN, and many others.