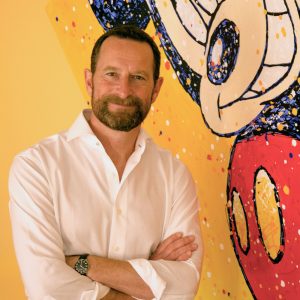 Having worked for The Walt Disney Company for 25 years, Duncan Wardle now serves as an independent consultant helping companies embed a culture of innovation and creativity. His unique Design Thinking methodology is now being used by major brands and corporations around the globe to solve real business challenges.

Most recently Duncan was Vice President of Innovation & Creativity at Disney. Heading a team that served as both “creative ideation consultants” and “cultural change agents” to Disney Imagineering, Pixar. Lucas Film, Marvel, ESPN, Disney Institute and Disney University, he designed a creative problem solving process, that is embedded in consumer truth. One that captures unlikely connections, leading to both fresh thinking and revolutionary ideas.

Prior to the leading the Innovation & Creativity team at Disney, Duncan held the posts of Vice President, Global PR and Vice President, International Marketing & Sales. Over the last three decades Duncan has served in an executive role for The Walt Disney Company in London, Paris, Los Angeles, Hong Kong, Mumbai and most recently Shanghai.

In 2008, he was honored with the “Outstanding American Citizen Award” at the White House and in 2014 he was awarded an Hons. Doctorate from Edinburgh University. He also holds the Duke Edinburgh Award, presented by Her Majesty the Queen.