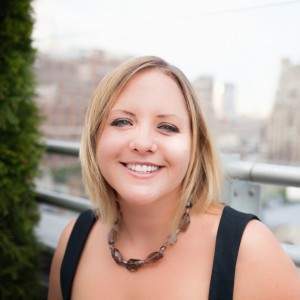 Kirsten Ott Palladino is the editorial director of Equally Wed magazine, the world’s leading wedding resource for LGBTQ couples, which she cofounded with her wife in 2010.

An award-winning editor and writer, Palladino has enjoyed having her work appear in esteemed magazines, newspapers and websites. For more than 14 years, she’s covered equal rights, weddings, art, travel, restaurants, fashion, beauty, celebrities, profiles and music. She’s been a recurrent guest on CNN discussing marriage equality and same-sex weddings, as well as an invited speaker at wedding industry conferences and gay rights conventions around the globe.

Most recently, Kirsten implemented a new business education program at Equally Wed, wherein she and her team will be educating companies small and large on how to make your wedding business more inclusive of the LGBTQ community and prepare for marriage equality.

After facing discrimination when planning their own nuptials and finding a major lack of same-sex couples in mainstream bridal and wedding magazines, Kirsten and her wife, Maria Palladino, launched equallywed.com, which provides the LGBTQ community with wedding-planning inspiration, photo galleries, real weddings, a marketplace of vetted equality-minded wedding vendors across the U.S., Canada, Mexico and the Caribbean, marriage equality news, and vetted honeymoon destinations—all on an multimedia platform of articles, photos and videos.
During the Equally Wed planning phase, Kirsten and Maria Palladino were the first lesbians to have their wedding featured in a national consumer bridal magazine in Get Married Magazine’s debut fall 2009 issue.

Kirsten Ott Palladino was the 2010 recipient of Atlanta Business Chronicle’s Up & Comers award, and Fenuxe Magazine’s 2011 Top 50 award “in recognition of her dedication to the Atlanta LGBT community.”

Kirsten lives in Atlanta, Georgia, with her wife and their twin sons, where they try to enjoy each day as it comes, walk barefoot in the grass, make nightly dinners together as a family, and laugh often.