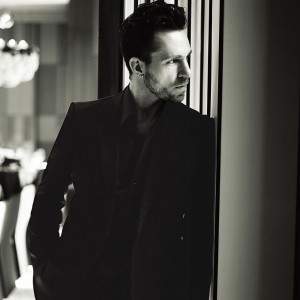 Jeff was Awarded the prestigious “Knighthood” / “Chevalier de L’Order des Arts et Letters”, by the French Governments its Highest Honor for Artists whom have made a significant contribution to French culture.

Jeff’s work is a combination of his love for flowers and his passion for design. His creations are bold statements, using shape, color and simplicity to produce a dramatic effect. Breathtaking and unforgettable, Jeff’s flowers and design essentials are always integral to the setting, never merely a backdrop. Jeff’s expertise continues to attract praise around the world as seen in his first two books “FLOWERS BY JEFF LEATHAM” and “FLOWERS BY DESIGN”, Jeff’s New Floral Design Inspiration book “Jeff Leatham – Visionary Floral art and Design” by Rizzoli.

Known for his floral installations that are often compared to contemporary art, His continuous collaboration with international luxury brands has allowed him to present his work in several international design expositions around the world.

Leatham’s floral design clientele is as impressive as his work, including Tina Turner, Oprah Winfrey, Madonna, Kylie Minogue, The Kardashians and Celine Dion, His Holiness the Dalai Lama and President and Secretary of State Clinton.

Leatham had the Honor of designing the flowers for the Wedding of Marc Mezvinsky to Chelsea Clinton, daughter of President Bill Clinton and Secretary of State Hillary Rodham Clinton.

Jeff has also has been featured on the Oprah Winfrey Show episode “Dream Jobs” and many times on the Martha Stewart and Queen Latifah Shows.

Jeff’s Collectors vases designed for Daum crystal were purchased by the Dallas Museum of Art for their permanent collection; his floral designs were also prominently displayed for the opening gala at the MoMA New York in 2004.

Also His Blossom Makeup collection with Asian Cosmetics “VDL” company in 2013 -2014 was a great success.

Jeff has begun a continuous collaboration with amFAR foundation for their event designs; Leatham’s continued collaborations with charitable foundations are an important way for him to give back.

His design collaboration with Hermès on the exclusive Rolls Royce Phantom for the Four Seasons George V has been well received and reviewed as well as his Design partnerships with luxury hotels and department stores on a global level.

One of Leatham’s greatest honors was designing the first major event since the time of Louis XIV and Marie Antoinette in the famed “Galerie des Glaces” (Hall of Mirrors) at the Chateau De Versailles.

Jeff starred in the docu-series, “Flowers Uncut”, which premiered on TLC / Discovery, and is in syndication and replayed around the world today.

Jeff Leatham’s passion for design expands and continues to advance into product lines with his own JL Home, Fine Fragrance collection.

“Jeff’s work has redefined floral design as we know it. I see his influence in my travels all over the world. And when I don’t see it, what’s before me simply looks outdated…. His work is an art form, graphic, architectural and always beautiful. His character shines through his work and I have come to love them both!!! He is a great friend and a great artist.”
-Kylie Minogue
“Jeff’s work is so beautiful and flawless that I feel a rush of endorphins whenever I’m in its presence.  I love his magical scenes which he creates through what appears to be an effortless blending of color, dimension and texture. He is a gifted artist who truly breaks traditional notions of beauty.”
-Janet Jackson
“Jeff is not a florist, he is a genius.”
-Cher
“Jeff’s arrangements and floral designs have influenced the floral arrangements in my home. His designs are unusually refreshing and very inspiring.”
-Tina Turner
“Jeff’s work embodies my love of colors, textures and shapes as he draws voluptuously and sensuously from a pastiche vocabulary of flowers and foliage, veritably akin to the Garden of Eden. He is a master at creating mystery and beauty and above all, sign-of-the-time elegance with the lightest of touches.”
-Emanuel Ungaro

What makes his flowers so seductive is his belief that they are an artistic medium… he infuses each display with clean lines, strong colors and a lot of unspoken sex.
-The New York Times Magazine

Jeff has not only revolutionized floral artistry by creating a new style characterized by intense colors, unexpected angles and grand dimensions, He has also influenced the design world I general.
-Nadja Swarovski

Jeff’s artistry with flowers is:

“The floral equivalent to Haute Couture-when you watch a master take a piece of fine fabric and drape it, so that it looks as through a cloud had fallen from the sky to the body.”
-Suzy Menkes / Fashion Editor International Herald Tribune

Since Jeff started with Four Seasons in 1994 in Beverly Hills and then designed the opening of the Four Seasons Hotel George V in Paris his success around the world has become renowned.  Seeing Jeff’s talent grow over the years gives me great pride as he has truly revolutionized the approach to flowers around the world and transformed it into a real art.

His flowers has become a trademark design for our company and influenced the vision of floral design around the world.   Jeff’s floral installations create an environment that touch people’s hearts and create beautiful memories. His flower displays are constantly reinvented for the greatest visual pleasure.

Founder and Chairman of Four Seasons Hotels and Resorts